The six-day blockage of the Suez Canal by a megaship named Ever Given came to an end on March 29 after salvage teams used dredging and tug boats to heave the vessel back into operation.

The capacity of a single vessel to block one of the world’s busiest shipping corridors, creating a traffic jam of hundreds of boats, has sparked a debate about the ever-growing size of megaships, with the Ever Given’s accident taken as evidence that they’ve simply become too large.

At 400 metres long, the Ever Given is indeed among the largest 1% of the world’s fleet. Its high-profile accident will result in a new wave of precautions to make megaships safer, but it will also prompt the shipping industry to reflect on whether such gigantic vessels actually do more harm than good.

Container ships have been increasing in size for decades in order to carry more containers on each voyage. According to analysis from Allianz, the number of 20-foot containers that ships can carry has increased by 1,500% over the past 50 years.

One of the most significant size upgrades came when Maersk introduced its E-series in 2006, which can carry around 15,000 containers – doubling the capacity of the previous largest container ships.

In the 15 years since then, some 133 ships have been launched with a carrying capacity of between 18,000 and 24,000 containers. These are classed as ultra large container vessels – the biggest boats in the world. The Ever Given is one such vessel. 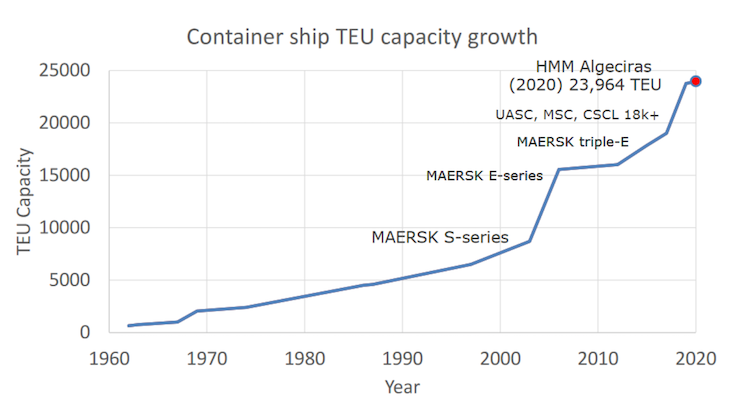 Megaships are particularly attractive for international shipping firms because they offer economies of scale: the larger the ship, the more efficient it is at transporting goods.

The Ever Given can carry 20,000 containers, while so-called very large containerships can carry a maximum of just 9,000 containers. Using just one vessel instead of two to carry the same load saves fuel, significantly reduces the cost of transportation per container, and reduces the ship’s environmental footprint.

When megaships were first introduced, there were doubts about whether they’d actually use their huge carrying capacity. But evidence suggests they do: the Ever Given was reportedly carrying more than 18,000 containers when it became wedged in the Suez Canal.

Unfortunately, carrying this many containers also has its downsides.

Operating megaships in confined waterways has already been shown to be difficult. Stacking them high with containers doesn’t help: it can lead the vessels to catch the wind and become even harder to control, which may have played a role in the Ever Given’s grounding.

When caught in a storm on open seas, such ships may also be more prone to losing containers overboard. According to recent analysis, at least five of the largest class of container ship lost containers during this year’s winter storm season in the Pacific.

Infrastructure is also struggling to cope with these larger ships. According to a 2015 report, ports, straits and canals require expansion to make way for the new class of megaships.

The cost of such projects is immense: the expansion of the Panama Canal in 2016 to accommodate bigger ships ended up costing over $5 billion (£3.6 billion). In light of these infrastructural concerns, there may be an economic argument against expanding the number or size of megaships in our seas.

Is the Size of Megaships to Blame?

An investigation is ongoing into the cause of the Ever Given’s accident, which should tell us to what extent her size was responsible. Based on previous incidents, strong winds, malfunctioning machinery and even human error could equally be to blame.

My research at the Maritime Safety Research Centre studies incidents such as this one, trying to understand the hazards and risks that may contribute to maritime accidents. When operational vessels run into trouble, we can learn from them to avoid accidents happening again.

If the Ever Given’s size was to blame for its accident, you’d expect other megaships, which have been transiting the Suez Canal for years, to have experienced similar difficulties. But a quick check of accident statistics shows that there are only two or three similar incidents involving megaships in the canal per year – out of 19,000 annual crossings.

In most cases, these are minor accidents causing little disruption, and they occur at such a low frequency that the Ever Given’s accident should not be interpreted as evidence that container ships have become too big.

But seeing as the consequences of the Ever Given’s accident were so severe, new maritime safety measures will rightly be put in place to avoid a similar incident happening in the future, such as ship design changes, better pilot training, the use of tug boats as canal escorts, autonomous guidance systems, and the widening of waterways.

Regardless of new safety measures, the Ever Given’s accident may well come to be regarded as a “black swan” event: an unpredictable one-off, rather than a sign of things to come. At present, there’s little evidence to suggest that container ships have become too big, or that the downsides of such megaships should result in their being scrapped.

Evangelos Boulougouris is Professor of Naval Architecture, Ocean and Marine Engineering at the University of Strathclyde

This article is republished from The Conversation under a Creative Commons license.

Manage Cookie Consent
We use cookies to optimise our website and our service but we do not collect any private data.
Manage options Manage third parties Manage vendors Read more about these purposes
Preferences
{title} {title} {title}
Go to mobile version